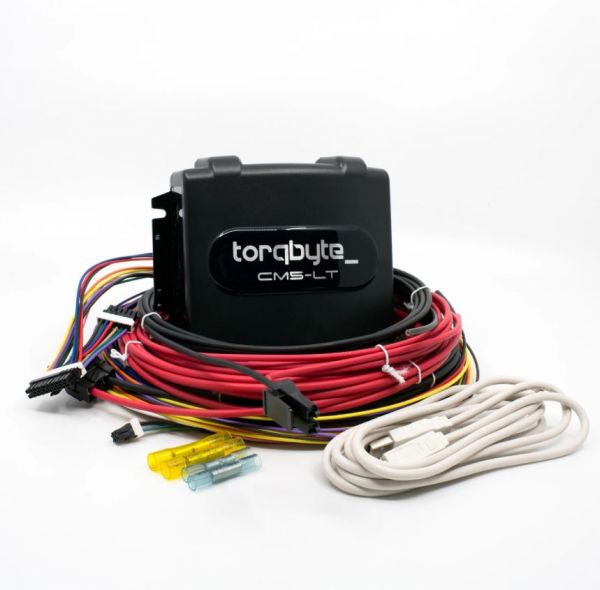 Note: CM5-LTS firmware Version 2.70 emulates previous CM5-LT functionality and does not yet support CANBus integration or GPO3 and GPO4 configuration. These additional functions will be made available in the next CM5-LTS firmware / TorqTune release - no hardware updates are required.

As the next generation of the highly popular CM5-LT, Torqbyte CM5-LTS raises the bar further as the most advanced programmable water methanol pump controller on the market. It is capable of simultaneously driving two individually-controllable water methanol injection (WMI) pumps and up to four individually controllable anti-siphon solenoids, Fast Acting Valves (FAVs), auxiliary high impedance injectors, relays, light indicators, or any combination thereof. Each of the CM5-LTS's two pump outputs is capable of supplying up to 15A to the connected WMI pump.

The base CM5-LTS kit Includes the following: CM5-LTS can interface with up to 2 flow sensors, an optional dash-mounted LCD display (or gauge), 0-5V analog inputs or the vehicle's CANBus network.

This additional functionality can be accessed via the optional I/O Expansion Module. Majority of water methanol kits utilize a control strategy that adjusts the flow of the injected water methanol mixture by “progressively” varying the speed of the delivery pump in relation to manifold boost pressure or the MAF sensor output. The S.A.D. progressive controllers all use manual entry of the start boost/MAF set point and the full boost/MAF switchover. The controller then implements a straight line between these two points and proportionately varies the pump duty back and forth along that line. The S.A.D. progressive controllers don’t allow for logging and analysis of the injection system performance. They are designed around a very low price target and are only slightly more sophisticated than a pressure-triggered hobbs switch wired directly to a pump. They are widely used because they are inexpensive and require very little skill to install and operate.

Higher-end water methanol kits utilize a different control strategy that attempts to mimic the operation of a port injected fuel system where flow of the injected water methanol mixture is controlled by varying the duty of a “fast response valve” which is placed upstream of a delivery pump whose duty is held constant, usually at 100%. Often the pump's internal bypass is used to keep the line pressure somewhat constant. This is a more sophisticated technical approach offering a slightly better response time in which injection system reacts to input changes quicker than the crude S.A.D. progressive controllers. This control approach also lends itself well to modern direct injection set-ups. The placement of the “fast response valve” inherently prevents siphoning which is a problem in modern direct injection set-ups where the injection nozzles without check-valves are exposed to manifold vacuum. Torqbyte Control Strategy: Up to the User

The S.A.D. progressive controllers can only drive a single delivery pump. They also usually have only a single channel for driving an optional anti-siphon on/off solenoid valve. This makes them somewhat less than optimal for use in direct injection set-ups or staged set-ups that require a lot of stages.
The higher-end European controllers can only drive a single delivery pump and one “fast response valve”. They cannot be configured for multiple stages of delivery, but they are provided with optional direct injection manifolds for 4, 6 and 8 cylinder configurations.

Torqbyte CM5-LT can drive two delivery pumps and two on/off solenoids or two “fast response valves” or one of each solenoid type. With the CM5-LT, the users can implement a VPD control approach based on RPM, boost or another 0-5V signal of their choice. They can also implement the FPD-VSD control strategy that is based on RPM, boost or another 0-5V signal. Because the CM5-LT has two PWM pump outputs and two General Purpose outputs (GPOs) which can either drive On/Off solenoids or PWM “fast response valves”, the user can implement a hybrid VPD/FPD-VSD control strategy or something completely new and unique. The CM5-LT also interfaces directly with the hardware provided by the S.A.D. progressive controller suppliers as well as the European controller suppliers, so upgrading your existing system to use a CM5-LT is simple and straightforward. In spite of its sophistication, CM5-LT is extremely easy to install and configure with our intuitive TorqTune PC software. This free software allows users to fully configure the operation of the Torqbyte CM5-LT. Certain parameters, such as duty cycle maps, can be adjusted with the engine running for real-time tuning. Additionally, TorqTune allows the user to live view many of the unit’s internal parameters, log them to a file and save them for later playback or for sharing with others. These advanced functions allow the user to observe the effects of various configuration changes in order to achieve unprecedented control of their methanol injection and/or fuel pump operation. TorqTune software can store your CM5-LT's configuration settings in special TTINI files that you can store on your hard drive or share with other CM5-LT users. Other users' configuration files can be loaded into your CM5-LT and used "as-is" provided your set-up is the same as the other user's or they can be used as a starting point for your own customization. TorqTune software can also log and play back saved log files which can be analyzed in TorqTune or in Excel. These features make the CM5-LT and TorqTune ideal for tuners who need to work on their customers' vehicles remotely.

The feature set provided by Torqbyte CM5-LT and its accompanying TorqTune software is not available with any other water methanol injection or fuel control system.

A Controller that Evolves with your Setup

If you don't need all of the CM5-LTS' advanced functionality right away, you can use TorqTune to configure the CM5-LTS to operate as a dumb "progressive" controller.

CM5-LTS is designed to be future-proof. Its internal unit firmware can be upgraded from your PC so you can continue to take advantage of new features and enhancements as they are rolled out. Simply download the latest firmware from our website's Support Page and reflash your CM5-LT directly from the TorqTune software. As always, all firmware and software updates are free for all our customers and our dealers.

If you already have a competitor's water methanol kit installed, but need more flexibility, the CM5-LTS can generally control all the exiting hardware in your water methanol set-up. Simply toss out that "progressive" controller and with a few simple wiring modifications you'll be on your way to being in full control of your water methanol delivery.

CM5-LTS block diagram is shown below: Nearly all other commercially available water methanol injection kits come with crude pump controller electronics packaged inside economy hobby electronics enclosures or gauge pods. These open-loop controllers vary the pump speed based a single parameter – usually boost pressure. They are often called "progressive" controllers presumably because they "progressively" increase the pump's duty relative to boost pressure. However, no consideration is given to air volume or engine load and the user is not provided with any useful means of fine-tuning the linearly-varying water methanol pump speed or customizing the water methanol delivery to account for non-linear engine operation. These limitations result in the same quantity of water methanol mixture being introduced into the cylinders at all engine speeds. This is clearly a less than optimal approach.

In order to establish accurate and predictable water methanol injection, a good estimate of air volume is required. Torqbyte CM5-LTS is the only controller on the market that accurately establishes the air volume by calculating pump duty based on two parameters: boost pressure and engine speed. The CM5-LTS' water methanol injection delivery is fully digital and is completely customizable by the user through a 16x16 table (i.e. a 256 point map) which is programmed into the unit.

Other water methanol kit providers state that their pump controllers are "digital", but what do they really mean by that. Sure, some of them come with a basic "digital" display that shows parameters like boost or pump duty, but how truly "digital" is their internal operation? As a true digital controller, the CM5-LTS is built around a fast microprocessor that performs linear interpolation (smoothing) simultaneously in both vertical (boost or voltage) and horizontal (RPM) axes to generate the pump duty values which are varied gradually between all adjacent table cells. This is the same approach used in  modern Engine Control Units (ECUs). Need to add a small dip in water meth delivery required at another RPM & boost point? No problem. The other controllers simply don't provide this level of flexibility, especially not in one unit that can control four outputs each with its own unique configuration table.

Torqbyte CM5-LTS is available with optional 50PSI and 100PSI Honeywell MAP sensors, but the TorqTune software allows you to configure the unit to use any 0-5V pressure sensor of your choice.

If you do not want to base your water methanol injection on RPM and boost, you don’t have to. Pump duty can be based on just RPM or just boost.

If you don't want to base the Water Methanol Injection control on boost pressure you may use some other 0-5V sensor or signal, by selecting which input should be used as the vertical axis source. If other exotic or unorthodox water methanol control schemes are required, the CM5-LT's two spare 0-5V analog inputs can replace boost as the vertical axis in each of the tables so you can base the pump duty on another 0-5V signal, such as the MAF or the TPS. You could even base your water methanol delivery on the 0-5V output of an O2 sensor controller or even a simple manual pot. With Torqbyte CM5-LT, you are in full control of your WMI pump operation at all times allowing you to make it fit virtually any vehicle or engine set-up.

The CM5-LT always stores the user-loaded 3D duty maps in its on-board, non-volatile memory. TorqTune software can store these maps in calibration files and allow them to be saved, opened, edited and shared. Pump duty cycle, boost, RPM and a number of other parameters can be logged and played back using the TorqTune software. Users can easily edit and customize the water methanol delivery calibrations for their specific engine configuration.